Jewell’s Athletic Hall of Fame was established in 1994 to recognize outstanding achievement by alumni and/or faculty in the areas of athletic achievement or coaching, or other noteworthy accomplishments in athletic-related areas. The selection is based solely on what the individual or team accomplished while associated with Jewell.

In recognition of the anniversary of the passing of Title IX as well as the 50th year of women's athletics attaining varsity status on campus, the 2022 class is all women for the first time in the history of the Hall of Fame. See an archive of all past inductees at jewellcardinals.com/honors/hall-of-fame. 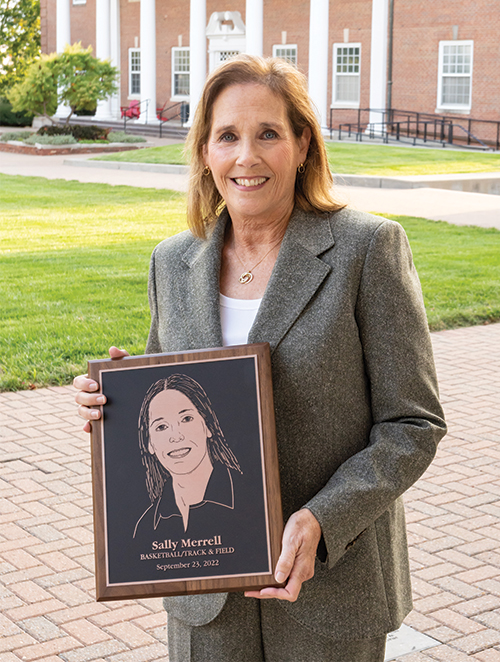 Sally Merrell was a varsity letterwinner in both basketball and track and field during her time as a Cardinal and was instrumental in the growth of women's sports on The Hill. On the court, she was an All-Conference Second Team honoree and as a senior, led Jewell to a 1981 AIAW State Championship after averaging nearly a double-double of 10 points and 8.3 rebounds. During her junior season she helped the team to a 14-11 record, the best in the young program's history, and placed third at the state tournament. In addition to her accomplishments on the basketball floor, Merrell is remembered for being one of the primary driving forces behind the formation of the women's track and field program. Along with teammate Jill Adams, she circulated flyers and helped find members of the inaugural squad of 1980. In their first meet, the Northwest Missouri State Relays, she became the first Cardinal woman to medal, placing third in the 800-meter run with at time of 2:23.80. While she will become the first member of her family inducted into the Hall of Fame as an individual, her father Fred is a member of the 1952 and 1953 football teams which were inducted in 2021. 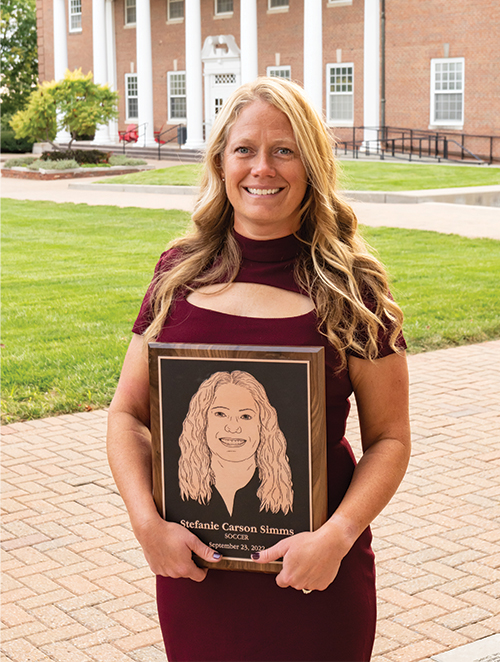 Stefanie Carson will become the third women's soccer player inducted into the Hall of Fame, joining Nicole Revenaugh, '07 and teammate Kristen Neher Ebberts, '05. During her career, Carson was a three time All-Heart of America Conference selection, including two first team honors, and was a two time honorable mention All-American. She led the Cardinals a 65-13-3 record over her four seasons with two conference championships and an NAIA final four appearance as a senior. She was selected the Team Defensive Most Valuable Player in 2002 along with Region V Second Team honors. 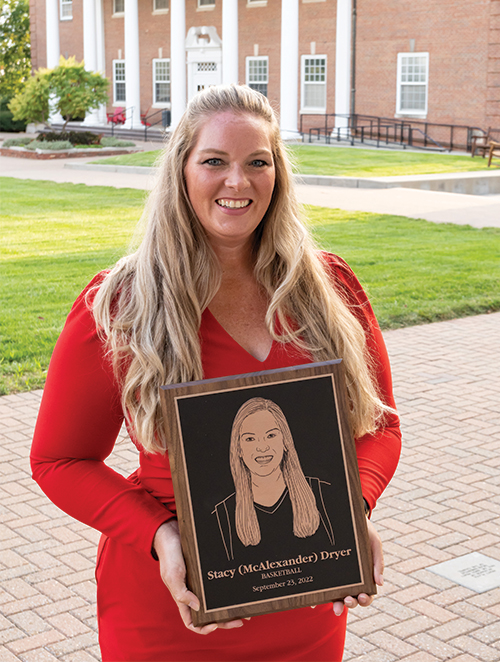 A three-year standout for the Cardinals, Stacy McAlexander dominated the hardwood from 2002-2005 and will become the 13th women's basketball player to be inducted into the Hall of Fame. She earned All-Heart of America honors in each of her three seasons, including first team recognition twice. She scored 1,394 career points which still ranks ninth all-time at William Jewell, while her 888 rebounds are second. She led the Cardinals to a 71-33 record and was a member of the two winningest teams in program history. During her career, the Cardinals won the 2003 HAAC Championship and qualified for two NAIA National Tournaments, including advancing to the Sweet 16 during her sophomore campaign. On January 8, 2005, she became the first player in program history to be selected as the NAIA National Player of the Week after posting three consecutive double-doubles and averaging 21.6 points and 11 rebounds over the span of three games. McAlexander capped her career with back-to-back NAIA All-America Honorable Mention honors becoming the fourth player in program history to be a multi-time All-American. 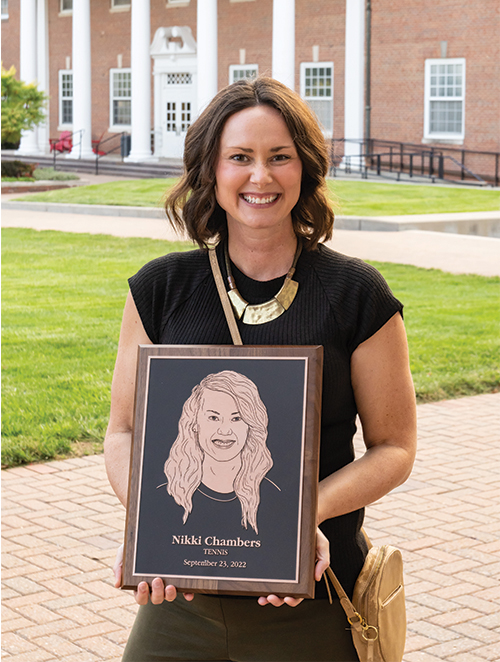 The best women's tennis player of the modern era, Nikki Chambers is amongst a select group of student-athletes to have been named an All-American four times. She is the program's all-time leader with 113 career wins and 57 in singles play. Her 56 doubles wins ranks fourth in a career as does her 15 single season doubles wins with partner Allison Cobb in 2008. She was a two-time All-Heart of America Conference honoree and was selected as the team's Most Valuable Player in each of her final seasons. The recipient of the 2011 ITA Arthur Ashe Leadership and Sportsmanship Award, Chambers qualified for the ITA National Championships in doubles three times and was the first tennis player to be named CoSIDA Academic All-District, receiving first team honors as a senior. In her final season, she led the Cardinals to a 17-7 mark, top-25 national ranking, conference championship and the program's first appearance at the NAIA National Tournament since 2005. She was selected by the William Jewell Athletic Department as the recipient of the 2011 Vicki Larason Landman Award for Women's Athlete of the Year. Following her athletic career, she served as an intern for the Great Lakes Valley Conference.

Ajok Deng is one of the greatest success stories in William Jewell Athletics history. After coming to the United States from her hometown of Khartoum, Sudan, she transferred to Jewell from Johnson County Community College and joined cross country team in the fall of her junior year after never competing in the sport. Despite her lack of experience, she was a natural and enjoyed immediate success, becoming the individual Heart of America Conference champion in her first season. She followed that feat by qualifying for the NAIA Cross Country National Championships and became the first black woman in school history to earn All-America first team honors after finishing 22nd with a time of 18:23. In the spring of 2011 she competed with the track and field team, winning individual HAAC championships in the 5000 meters, 3000 meters and mile in the indoor competitions as well as the 1500 meters and 10,000 meters during the outdoor season. Deng made her debut with a second-place mark at the Northwest Missouri State Bearcat Open and was selected the HAAC Runner of the Week in October of 2010 after taking fifth at the Yellowjacket Invitational (Graceland) and defeating all HAAC and NAIA runners. 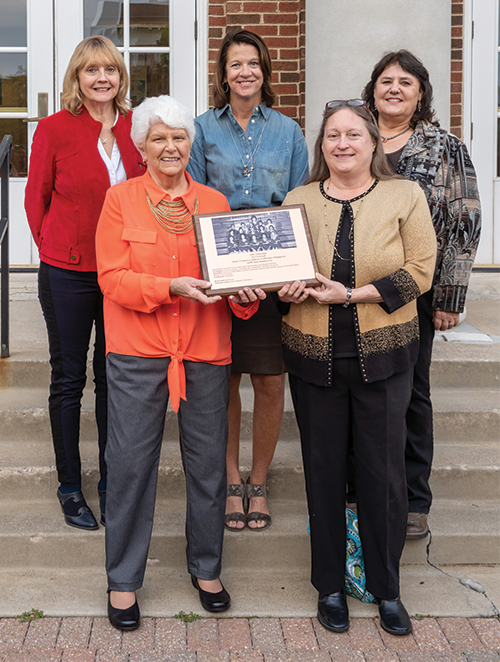 For the first time in school history a women's varsity team won a conference championship in the fall of 1981 as women's volleyball brought home the Heart of America Conference title. Coached by Barb Macke, the Cardinals were the first team to play games in the Mabee Center and opened the new arena in style, going 20-15 on the season. This team also took second place in the AIAW state tournament after coming in as the No. 4 seed and boasted six All-Conference honorees, the most in a single season in program history (now tied with 2006 & 2007). Freshman Kay Kovar and sophomore Lorry Kohrs were listed on the first team while Kyla Harding, Barb Schertzer, Jenny Maynard and Pam Sexton earned second team honors. In the conference tournament, the Cardinals overcame a 10-0 deficit to defeat Tarkio in the final qualifying match of pool play, winning 15-12 to secure a spot in the playoff round. In the playoff, Jewell defeated Ottawa University, whom they had lost to earlier in the season before downing Central Methodist 15-3, 15-12 in the title game to hang a women's championship banner for the first time. This is the first team in the volleyball program's history to be chosen for induction into the Hall of Fame. 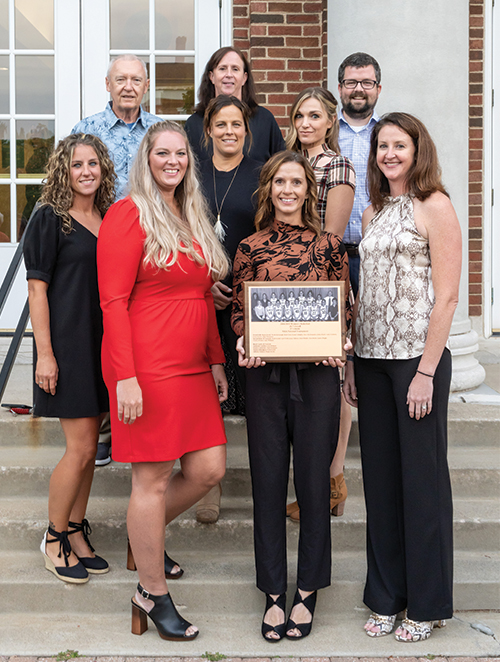 The 2004-2005 women's basketball team is the winningest team in program history, going 28-7 on the season and will become the third team inducted into the Hall of Fame, joining the 1987 and 2003 squads. These Cardinals finished as the HAAC runners-up with a league record of 17-3, including 10-0 at home. In February of that season, they became the first team in program history to earn a top-10 national ranking, coming in at No. 10. At the conclusion of the year, this team had set new program records for free throw percentage (71%) and defensive scoring average (62.8) and earned their third trip to the NAIA National Tournament in four years. This team was headlined by two players who left their mark on the program in Lynsay Gallagher and Stacy McAlexander. Both became members of the 1,000-point club during this season and were named All-America Honorable Mention. Gallagher scored 640 points (18.3 ppg) on 230 field goals, setting single season program records in both categories on her way to first team All-Conference honors while also being named the Most Outstanding Player of the Crusin' Classic. Alexander, who is also a member of the 2022 induction class as an individual, was also a first team All-HAAC honoree after averaging 15.1 points and 9.0 rebounds and graduated as the second all-time leading rebounder with 888. Additionally, Kerri Vena was a third team All-HAAC selection and finished her career ranked fourth (now 10th) with 261 assists, averaging nearly four per game in 2005. 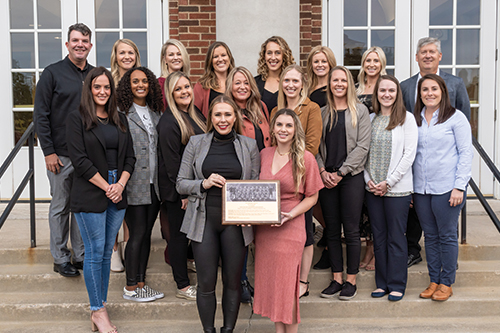 In their final season in the NAIA, this Cardinal team, coached by Hall of Famer Chris Cissell, made history qualifying for the program's third national tournament and advancing to the quarterfinals. The team finished with an overall record of 16-3-2 overall and 7-1-1 in conference play, to finish second. The Cardinals outscored their opponents 60-26 on the season and were on goal on better than 62% of shots taken. Additionally, the team ranked among the top-25 in NAIA Division I in total goals (60), shots on goal per game (10.8), goals per game (2.9), total assists (48) and assists per game (2.29). This team boasted an impressive eight All-HAAC players and two All-Americans in Danielle Doerfler along with freshman Sarah Franklin. Franklin led the offense with 30 goals, half of the team's total in this season, and led the NAIA in game winning goals and shots on goal per game while being number two in total goals, goals per game, total points, and points per game. After this incredible debut, she went on to become the most dominant player in the NCAA era during the remainder of her career. In the national tournament, the Cardinals dominated Ashford (Iowa), 8-4 before grinding out a 1-0 win over Kansas Wesleyan to advance to the final eight. Jewell fell 5-2 to nearby Baker University in the quarterfinals, the second furthest postseason run in program history. This is the second women's soccer team to be inducted into the Hall of Fame, joining the 2003 squad.